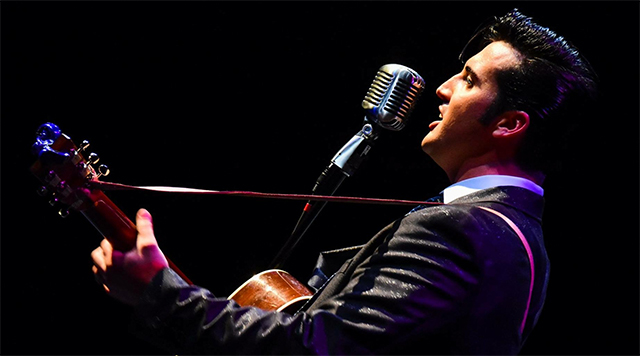 October 8, 2022 • 8:00pm Studio A Tickets from $14.00 Facebook(Opens in a new window) Buy Tickets(Opens in a new window)
Brandon Bennett is a native of south Louisiana, and is known world wide for his award winning talent in the tribute industry. In his over 16 years in the business, Brandon has been a part of a diverse scene paying tribute to The Greatest Entertainer of our time, Elvis Presley. Brandon was awarded the title of "Ultimate Elvis Tribute Artist" by Elvis Presley Enterprises. Featured television appearances on "The Late Show with David Letterman", "The NBC Nightly News", "The Ricki Lake Show", & "American Hot Rod". Lead roles in the long running, Elvis Presley Enterprises endorsed, music revue "THE ELVIS STORY" & The Tony Award Winning Musical "MILLION DOLLAR QUARTET". He has made featured performances at professional sporting events for THE CHICAGO BULLS, THE CHICAGO CUBS,THE CHICAGO WHITE SOX, THE CHICAGO BEARS, THE MEMPHIS GRIZZLIES, & THE SAN FRANCISCO GIANTS.