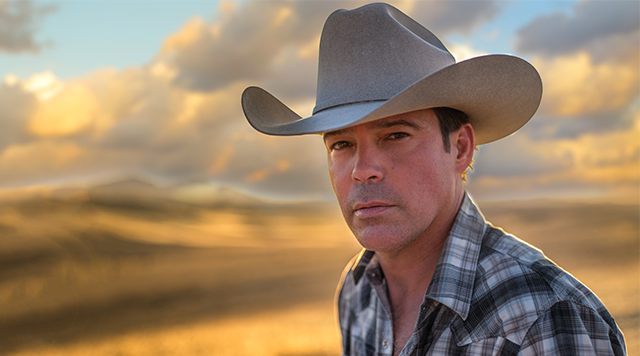 October 22, 2022 • 8:00pm Studio A Tickets from $50.00 Artist's Website (Opens in a new window) Facebook(Opens in a new window) Buy Tickets(Opens in a new window)
There's more to the duality of Clay Walker's debut Show Dog Nashville album Texas To Tennessee than the title. Certainly, the realities of place are as central as this comeback album's name implies: Nashville busily working toward the next fresh hit; Texas moving at its inimitable and familiar pace. There's also a mix of songwriting and production approaches, evident and more nuanced relationships between the songs themselves, and the overarching presence of a naturally gifted vocalist who relentlessly pursues his own development as a singer. But don't mistake those dualities for dichotomy – and certainly not polarity. In a storied career dotted with smash singles, platinum albums and countless honors and acclaim, maybe the connection between country's timeless themes and music-of-the-moment timeliness has been there all along.

Many of the country fans behind the almost 20 million on-demand and video streams for his latest single "Need A Bar Sometimes" – who may also be among his 750,000 TikTok followers – are wholly unaware of Walker's history. Discovered in a Beaumont area bar by noted producer and head of Giant Records James Stroud (Toby Keith, Tracy Lawrence, Tim McGraw, Kenny Rogers), Walker was in his early twenties when he started rattling off a string of smash hits. Among them, “Live Until I Die,” "Dreaming With My Eyes Open," “This Woman And This Man,” "Hypnotize The Moon," "Rumor Has It," “Then What,” "I Can't Sleep" and "She Won't Be Lonely Long." His self-titled debut album rocketed to platinum status, the first of four to cross the million-sold mark. Racking up more than 30 charted singles and 11 No. 1s wasn't without its struggles, however.

"Being born and raised in the Houston area, I thought of myself in the line of George Strait and Clint Black, but my first producer had other ideas," Walker says. "James Stroud pushed me more towards pop sounds I fought with. What he was saying, and I think he was right, was, 'Clay, you've got some gears to you that will excite people if you let it.' I was young – 23 – and didn't really settle with that. But now I'm in a sweet spot in music, in life, and I definitely feel the audience has swung around to appreciating music that makes those connections."

Those links are obvious on Texas To Tennessee. "Anything To Do With You" opens the album with smooth bore country that would feel right at home on any of Walker's four platinum CDs. Song two is the counterweight single, with its processed steel guitar lick, wistful pandemic-perfect theme and explosive streaming numbers.

Texas To Tennessee is also a modern album that nods at an earlier era in its time economy. Clocking in under 30 minutes in its entirety and with more than half its songs under three minutes, it recalls some of country's historical best in terms of uncluttered writing, directness of message and finely shaved construction.

Walker is quick to point fingers. "Throughout my career, there have been key people who helped me put albums together, find or write good songs and get them out to fans," he says. "But I saw something with this album I've not experienced: what it takes to make a championship happen. The songs are your deep-threat wide receivers. The full support of your record label is the offensive line. Michael and Jaron – these guys ran through walls for me. Everyone has done their part and it's impressive. You can have talent, be famous or have a few hits, but you can't win the Super Bowl without champions around you. Man, I've got 'em.

Teamwork is also at the core of Walker's battle against Multiple Sclerosis (MS). Diagnosed in 1996, he has become a passionate advocate and fundraiser for others with the disease through his Band Against MS. Among his efforts are the annual Clay Walker Charity Classic at Pebble Beach. The golf event highlights the highly active way Walker has approached MS, continuing to perform and raise a growing family while showing no signs of slowing.

"It's very gratifying to be at a point in my life where I can offer something in its fullness," he continues. "I've never quite had that before. I was pegged as a neo-traditionalist early on, but I don't think I fit that mold. For a lot of reasons – maybe the pendulum of music is in the perfect spot – but today's music and my style have hit center on this album."
Cost:
Tickets from $50.00 plus taxes and convenience fees