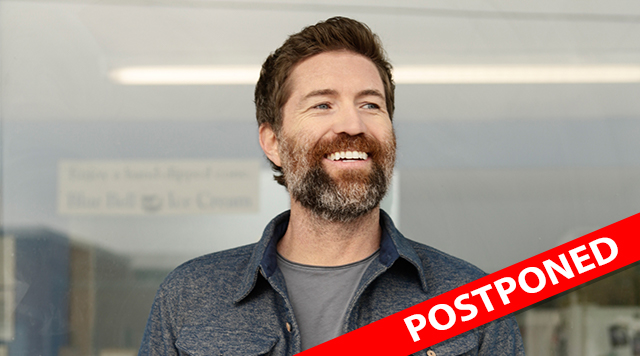 Studio A Tickets from $40.00 Artist's Website Facebook
Josh Turner originally scheduled for Friday, April 10, 2020 and Friday, February 5, 2021, is postponed. Updates will be provided once the new show date is confirmed.

Tickets already purchased will remain valid for the new show date. For those who cannot attend the new date, refunds will be authorized at point of purchase once the new date has been announced. Once refunds are authorized, guests who purchased tickets from IP on property can return for their refund at Essentials gift shop. You will need to hold on to the tickets you purchased as we will require them to process the refund.

Complimentary offers are cancelled at this time and will be reissued to qualified guests once the shows are rescheduled. MCA Nashville recording artist Josh Turner, while a multi-platinum-selling star himself, is a country music fan first and foremost. He’s even concocted his own version of Mount Rushmore conceived solely of country music legends. Turner’s “Mount Rushmore of Country Music” boasts five faces rather than four (it’s his mountain, after all) — Randy Travis, John Anderson, Johnny Cash, Vern Gosdin, and Hank Williams.

The giants carved into the granite of Turner’s musical soul form the core of his aptly titled new album, Country State of Mind. “I’ve always said that any song you hear coming from my voice, you’re going to hear bits and pieces of those five guys,” he says. “They taught me how to be Josh Turner.”

The dozen songs on Country State of Mind, including songs from those five legends among others, span more than half a century of classic country music, encompassing both well-known standards and deep-catalog cuts. The album shows a singer in dialogue with the songs and the artists that shaped his vision. It’s a conversation — relayed in the distinctive, resonant baritone that brought Turner #1 hits and five gold and platinum albums — between the past and present of country music. And on half the tracks, Turner invites other voices — some heroes, some contemporaries — to join him in the conversation.

From the very start of his career through chart-topping hits like “Your Man,” “Would You Go With Me,” “Why Don’t We Just Dance,” and “All Over Me,” Turner has immersed himself in country music’s history and its iconic figures. After all, this is someone who, as a student at Nashville’s Belmont University, took an open gate on Johnny Cash’s property as a sign he should knock on the legendary singer’s door and introduce himself.

Later, as the hits came, along with multiple GRAMMY, CMA, and ACM nominations, Turner joined the Grand Ole Opry. One of country music’s oldest and most hallowed traditions, the Opry once counted Hank Williams Sr., Johnny Cash, and George Jones among its ranks; now, Turner shares membership with heroes like Randy Travis, Alan Jackson, and Patty Loveless, as well as guest Chris Janson.

For nearly two decades, Turner has been one of country music’s most recognizable voices, selling more than 8.5 million units and amassing more than 2.5 billion global streams. He has never kept his reverence for traditional country music a secret, but, with this latest album, Josh Turner is definitely in a Country State of Mind.

Really, though, he always has been.
Cost:
Tickets from $40.00 plus taxes and convenience fees