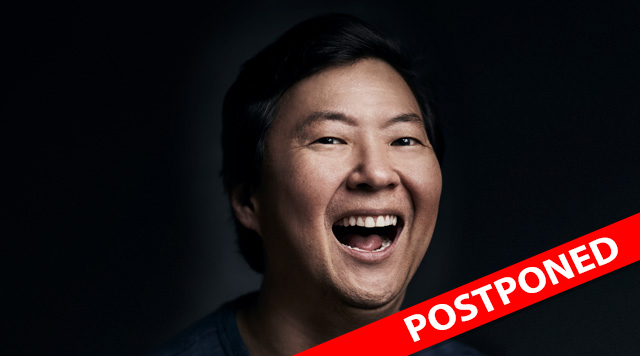 Studio A Tickets from $59.00 Website Facebook
Ken Jeong is postponed. Updates will be provided once the new show date is confirmed.

Tickets already purchased will remain valid for the new show date. For those who cannot attend the new date, refunds will be authorized at point of purchase once the new date has been announced. Once refunds are authorized, guests who purchased tickets from IP on property can return for their refund at Essentials gift shop. You will need to hold on to the tickets you purchased as we will require them to process the refund. Actor, producer and writer Ken Jeong, known for his scene stealing abilities, has established himself as one of today’s top comedic stars. In May of 2009, Jeong appeared as the Asian-mobster “Mr. Chow” in the sleeper-hit comedy THE HANGOVER also starring Bradley Cooper, Ed Helms and Zach Galifianakis, which earned Jeong an MTV Movie Award in 2010, and in which the film itself won The Golden Globe for Best Comedy/Musical and Critics' Choice Award for Best Comedy in 2010. The film was the highest-grossing R-rated comedy to date, with over $467 million worldwide, only to be trumped by THE HANGOVER PART II”, which grossed $581 million worldwide.

Since his feature film debut playing the doctor in KNOCKED UP in 2007, Jeong has gone on to star in a number of memorable roles in a series of successful comedies. In 2008, Jeong had his first major role opposite Paul Rudd and Seann William Scott as the villain in David Wain's ROLE MODELS. That same year he also appeared in the cult comedy hits PINEAPPLE EXPRESS and STEP BROTHERS.

Jeong’s career path started off on a different course. He earned his undergraduate degree at Duke University and went on to get his medical degree at the University of North Carolina. Jeong completed his Internal Medicine residency in New Orleans all the while developing his comedy. In 1995, Jeong won the Big Easy Laff Off. The competition, which was judged by former NBC President Brandon Tartikoff and Improv founder Budd Friedman, turned out to be his big break as Tartikoff and Friedman urged Jeong to head to Los Angeles.

Once in Los Angeles, he began performing regularly at the Improv and Laugh Factory, and was seen on a number of television shows including “The Office”, “Entourage”, and “Curb Your Enthusiasm”. It wasn’t until he caught Judd Apatow’s eye, who cast him as “Dr. Kuni” in KNOCKED UP that he solidified himself as a feature film actor.

In 2011, Jeong reprised his role of “Mr. Chow” in the summer blockbuster, THE HANGOVER PART II. Following up on the success of THE HANGOVER, the much-anticipated sequel surpassed expectations in every way, already grossing almost 600 million dollars and beating THE HANGOVER while setting box office records for R-rated films. The film went on to gross almost 400 million worldwide. Other film credits for Jeong include TRANSFORMERS 3, PAIN & GAIN, DESPICABLE ME 2, TURBO, THE DUFF and RIDE ALONG 2.

This past summer, Jeong appeared in the Warner Bros box office sensation CRAZY RICH ASIANS which grossed over $150 million worldwide and earned multiple nominations including Golden Globes, SAG, and People’s Choice. CRAZY RICH ASIANS won the “Best Acting Ensemble” award at the National Board of Review awards as well as “Best Comedy” at the Critics’ Choice Awards. He was also seen in GOOSEBUMPS 2.  Upcoming projects include ELSEWHERE, WONDER PARK, OCCUPATION RAINFALL, MY SPY, BOSS LEVEL and EL TONTO.

In television, Jeong was most recently seen starring on ABC’s “Dr. Ken”, which he was the creator, writer, and Executive Producer. He also was a series regular on the critically acclaimed NBC show Community from 2009-2015, which won the Critics' Choice Award for Best Comedy Series in 2012. In 2015, Jeong directed an ESPN 30 for 30 documentary Student Athlete, and he also starred in and produced the Sundance award-winning film Advantageous, which received an Independent Spirit Award nomination. Jeong can currently be seen as a judge on the FOX ratings success “The Masked Singer.”

Jeong returns to his stand-up roots for his first-ever Netflix comedy special, “Ken Jeong: You Complete Me, Ho” which launched globally on February 14, 2019. Filmed at the Ice House Comedy Club in Pasadena, California, where Jeong first got his start in comedy, the special reflects on how Jeong went from being a doctor to a comedy superstar and opens up about how his wife’s courageous battle with breast cancer led to him starring in one of the biggest comedy franchises of all time, THE HANGOVER, and more recently, CRAZY RICH ASIANS.

Jeong dedicates his spare time to volunteering with Stand Up 2 Cancer, which is a cause very dear to his heart.

He currently resides in Los Angeles with his wife and twin daughters.
Cost:
Tickets from $59.00 plus taxes and convenience fees