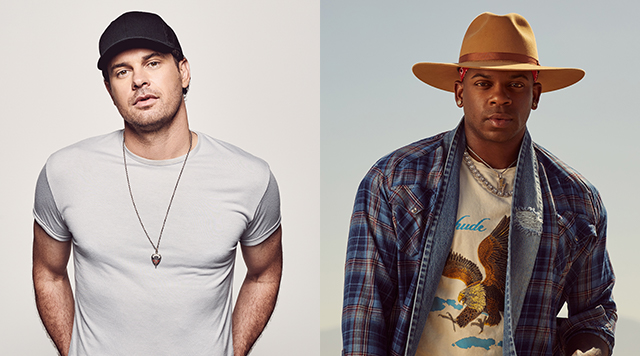 Tickets already purchased will remain valid. Refunds have been authorized at point of purchase for those who cannot attend the new date. Guests who purchased tickets from IP on property can return for their refund at Essentials gift shop. You will need to hold on to the tickets you purchased as we will require them to process the refund.
MATT STELL

Matt Stell knows what it means to stand at the crossroads.

He was there not too long ago, guitar in one hand and textbook in the other.

The road to his right led toward Cambridge, where Harvard University admitted him to their premed program. Beyond that horizon lay all that a physician’s career could promise: security, meaningful work, maybe a lifetime in academia.

To the left, the other road pointed toward Nashville: honky-tonks, writing sessions and, beyond all that, uncertainty.

Fortunately, Stell made the right choice.

Growing up Stell divided his time between living with his mother on the Florida coast south of Tampa and spending summers, Christmases and spring breaks with his dad in Center Ridge, Arkansas, where he was born. “I saw the ocean in one place and cows in the other,” he explains. “In Florida I lived where the South starts to peter out and the snowbirds from the Northeast come to visit. In Arkansas I was part of a farming family whose roots went back four or five generations. That helped me understand right at the start that family is important … but there’s also a big world out there.”

That applied to music as well. “My grandpa exposed me to Johnny Cash before that was cool,” Stell says. “Since then I’ve always gravitated toward the older stuff from folks like Ernest Tubb, Patsy Cline and Merle Haggard. But I also spent half my time with a single mother, so I heard a lot of Bonnie Raitt, Alison Krauss and those ‘single-mother’ artists, which is still some of my favorite music.”

Still, he was slow to try writing or playing himself. Stell was around 12 when his mother gave him his first guitar, which he promptly stowed in a closet and forgot about for eight years or so. Instead, he threw himself into basketball, getting good enough to earn an athletic scholarship and pave the way toward earning his bachelor’s degree at Drury University in Springfield, Missouri and his masters in communication at the University of Arkansas.

He began hanging out with fellow students from Texas, who opened his eyes to their state’s unique legacy of great country music artists. “These people would write their own songs and travel on the road, playing sings to people who were eager to listen. For some of them, something the artist wrote really moved them. That became a big deal to me. I wanted to do that too.”

So Stell began to write. When a bar opened up near the campus that catered to performers doing original material, he signed up. It wasn’t long before he was a regular to that stage, even playing under a pseudonym—Paul Wayne Walker—so that his coach wouldn’t find out. Although he’d enjoyed all kinds of music as a kid, the songs he wrote drew from that well of country music he’d fist tasted with his family. “Country music is baked into the ground where I’m from,” he says. “It permeates like creeks and rivers do.”

Though inspired by time he spent as a student on a medical mission to Haiti, Stell realized when he reached that crossroads that music was the path he was destined to follow. He made the move to Music City around 2014, rented a room from a friend for a while, started playing writer rounds and eventually was signed with Wide Open Music. Headed by songwriters Ash Bowers and Steve Williams, the management firm guided and supported Stell as he stepped decisively down the road — the right road — toward what he now knows he always really wanted.

“I want to be on a stage somewhere, with people singing the songs I wrote back to me,” he says. “I want what I say through my songs and my performance to mean something to people the way that my favorite music means something to me. I hope that audience is as big and diverse as possible. As long as I’m able to achieve that, then I will feel like I’ve won.” JIMMIE ALLEN

The epitome of the phrase “persistence pays off,” Jimmie Allen laid it all on the line to make his dreams a reality. Now signed to BBR Music Group’s Stoney Creek Records, Allen’s debut single “Best Shot” is a certified hit, claiming the spot as the No. 1 Most Shazamed song in the format for eight consecutive weeks, and claiming the No. 1 spot on Country radio for three weeks, marking the first time a black artist has launched a career with a No. 1 hit with their debut single on Country radio.

On October 12th, Allen released his hotly-anticipated debut album, Mercury Lane, named in tribute to the street he grew up on and the origin of his incredible journey. Featuring a cutting-edge mix of country, rock, R&B and pop, Mercury Lane draws upon the influence of his family and small-town upbringing of the critically-acclaimed rising star. Rolling Stone raved Allen’s debut “challenges the narrowly defined model of what constitutes a next big thing in country music in 2018.”

The Southern Delaware native’s talent for songwriting is undeniable, having written a song that was featured in a Super Bowl commercial and appearing in a Diet Coke ad with megastar Taylor Swift. “Blue Jean Baby,” off his debut self-titled EP, immediately caught the attention of country music fans and critics alike with its soulful groove— rocketing it to the top of digital playlists, across all genres. After introducing his music at festivals across the country last summer, this winter Allen will hit the road once again to share the stage with Kane Brown and Scotty McCreery. The hot newcomer has already been heralded as one of the top “artists to watch in 2018” by Rolling Stone, Billboard, Pandora, Sounds Like Nashville, NY Country Swag, Country Music Rocks and New England Country Music and has earned spots in CMT’s “18 for 2018” Listen Up program and Bobby Bones’ Class of 2018.
Cost:
Tickets from $29.00 plus taxes and convenience fees