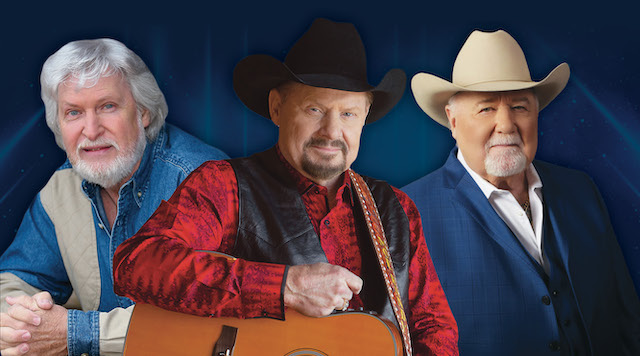 Joe Stampley has had over 60 charted songs including his #1 hits, “Soul Song”, “Roll On Big Mama” and “All These Things”.

In 1979, country stars Moe Bandy and Joe Stampley joined forces and recorded a tongue in cheek novelty single, "Just Good Ol' Boys". The song went on to top the country chart and it led to a continuation of their partnership. The duo, commonly known as "Moe and Joe", had more novelty hits between 1979 and 1985, including "Holding The Bag", "Tell Ole I Ain't Here", and "Hey Joe (Hey Moe)".

In 1984, the then-current Boy George/Culture Club phenomenon, “Karma Chameleon” inspired the parody of “Where's The Dress".  The song reached #1 for 3 weeks on the Billboard pop chart early that year. "Where's the Dress" peaked inside the Top Ten, at #8 on the country charts.

The “Good Ol Boys Reunion” is a fantastic show with hits galore, and a wonderful trip down memory lane.

JOHNNY LEE - THE URBAN COWBOY
Johnny Lee’s breakthrough hit, “Lookin’ for Love,” helped usher in an historic era in country music, and four decades later Johnny Lee remains one of the genre’s most beloved entertainers. Possessing enviable comedic skills and a voice as warm and strong as sunshine on the Texas asphalt, Lee has enjoyed a successful career, but he isn’t near ready to call it quits yet. The proof is in his new album Everything’s Gonna Be Alright.

The 14-song collection looks poised to be a landmark album in an already impressive career, spotlighting not only Lee’s signature vocals but also his talent as a songwriter. The Texas native wrote or co-wrote the bulk of the project. “I’m more proud of this album because I wrote most of the songs on there,” Lee says. “I’m proud of the rest of my stuff too, but I’m really proud of this one because I’m the creator.”

Everything’s Gonna Be Alright is the quintessential Johnny Lee album with a diverse collection of songs ranging from the positive message of the title track and first single to the wistful romance of the tender love song “Annie” to the up tempo romp “Sawin’ on the Fiddle,” which he wrote to pitch to the late Charlie Daniels. Among the originals, the Texas Country Music Hall of Famer also puts his indelible stamp on such classics as the Leon Russell penned “A Song for You” and “Statue of a Fool,” an iconic hit made famous by the late Jack Greene. Lee recruited his longtime pal Willie Nelson to play his legendary guitar Trigger on “Did You Enjoy Hurting Me?” The album closes with the bonus track “Father’s Daughter.” Written and sung by his daughter, Cherish Lee, the song is a poignant tribute to Lee as a father and an artist.

A native of Texas City, Texas, Lee grew up on a dairy farm and formed his first band in high school. Following graduation he enlisted in the Navy and served on the USS Chicago, a guided missile cruiser. “When I first got out of the military, I was going to be a cop out in California,” Lee recalls. “I took all of the tests and passed everything, but then I got in an old Chevy and drove back to Galveston, Texas.”

Lee began performing on the Lone Star state’s competitive nightclub circuit, and began working with Mickey Gilley in 1968. He performed with Gilley on tour and at Gilley’s legendary club in Pasadena, Texas. The 1980 film Urban Cowboy, starring John Travolta and Debra Winger, was set predominantly at Gilley’s and Lee performed three songs on the multi-platinum selling soundtrack—“Rode Hard & Put Up Wet,” “Cherokee Fiddle” and “Lookin’ for Love,” which topped the Billboard Hot Country Singles chart for three weeks and became a crossover hit, peaking at No. 5 on the Billboard all genre Hot 100.

Urban Cowboy became a phenomenon and country music’s popularity hit an all-time high. “I figured it was going to catapult my career or set me back 10 years,” Lee says with a grin. “I had no idea it was going to be as big as it was. All I know is that it’s got staying power. It’s still played all the time.” Lee continued to score such hits as “One in a Million,” “Bet Your Heart on Me,” “You Could Have Heard a Heartbreak,” “Be There For Me Baby,” “Sounds Like Love,” “Cherokee Fiddle,” “Pickin’ Up Strangers” and others. Over the years, Lee’s discography has grown to include two dozen albums. Everything’s Gonna Be Alright is Lee’s first album release since 2016’s You Ain’t Never Been to Texas.

Like all musicians, Lee is anxious to get back to touring in the wake of the pandemic, and plans to resume the Urban Cowboy Reunion Tour in celebration of the film’s 40th anniversary. He could rest on his considerable laurels, but being an entertainer isn’t something he can walk away from. “That’s who I am,” he says. “That’s what I do. That’s what I’m all about.”
Cost:
Tickets from $29.00 plus taxes and convenience fees