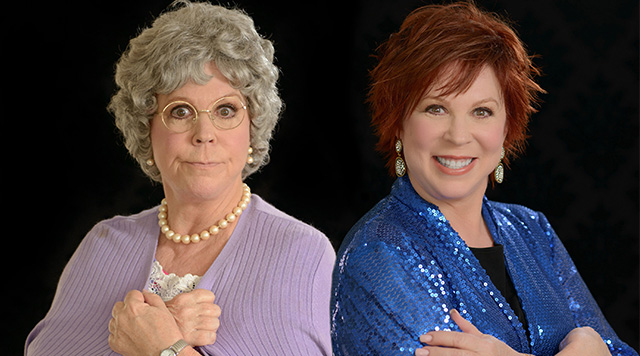 Tickets already purchased will remain valid for the new show date. For those who cannot attend the new date, refunds will be authorized at point of purchase. Guests who purchased tickets from IP on property can return for their refund at Essentials gift shop. You will need to hold on to the tickets you purchased as we will require them to process the refund. Multi-talented Vicki Lawrence, is an actress, comedian, and singer known for the many characters she originated on CBS's The Carol Burnett Show, where she appeared from 1967 to 1978, for the entire series run. One such character, Thelma Harper/Mama, was the central character of ever popular television situation comedy series Mama's Family. The show still can be seen daily in syndication throughout most of the country and is available as part of a Time-Life DVD collection.

Lawrence is currently co-starring in the popular FOX-TV comedy series The Cool Kids. The series has been picked up for a full season of 22 episodes due to its Friday night success. The Cool Kids is a comedy about a rowdy, rag-tag group of friends living in a retirement community who are willing to break every rule in order to have fun. Lawrence’s co-stars are David Alan Grier, Martin Mull and Leslie Jordan.

Lawrence spends much of her time on the road with her stage production Vicki Lawrence and Mama, A Two Woman Show. She also enjoys speaking to women’s organizations and other great causes, where she shares her life story of fame, activism, and her continuing success. All the while she approaches everything with her characteristic sense of humor, reminding us all that “Life is much too serious to be taken seriously!”

Lawrence has multiple Emmy Award nominations, winning one in 1976. She is a multiple Golden Globe nominee, all for The Carol Burnett Show. In 1973, Lawrence recorded the hit song "The Night the Lights Went Out in Georgia." It reached Number One on both the United States and Canada top charts.

In the past, Lawrence hosted a popular game show, Win, Lose or Draw, her own daytime talk show, Vicki!, and appeared in many theatre productions. She was the only talk show host since Oprah to be nominated for a Daytime Emmy in her freshman year.

Through the years Lawrence has made appearances on other television programs, such as Laverne & Shirley, Major Dad, Roseanne, Hannah Montana, and Yes, Dear. Lawrence has also appeared with Burnett, Korman, and Tim Conway in the Burnett show retrospectives.

On stage Vicki has appeared in numerous productions, including Carousel, Send Me No Flowers, No, No, Nanette, Chapter Two, Hello Dolly, I’m Getting My Act Together and Taking It ON The Road, Annie Get Your Gun and live from the Grand Ole Opry, Nunsense 3: The Jamboree which aired on TNN.

Vicki is not only a successful actress, she also is involved in many causes close to her. She was the honorary head of the D.A.R.E program, raised money to protect widows and families of slain police officers in Long Beach, CA, supports the Humane Society and works with the American Heart Association as well as WALK FOR THE CURE. Her efforts to protect women’s rights were recognized in 1988 when Vicki was the first woman to be honored as “Person of the Year” by the Coalition of Labor Union Women.

Lawrence was diagnosed with chronic idiopathic urticaria (CIU) around 2011. She teamed with the Asthma and Allergy Foundation of America and has become the spokesperson for the campaign CIU & You. She appeared on The Doctors in 2015 to relay her story and talk about CIU and promote the CIU & You campaign.
Cost:
Tickets from $34.00 plus taxes and convenience fees